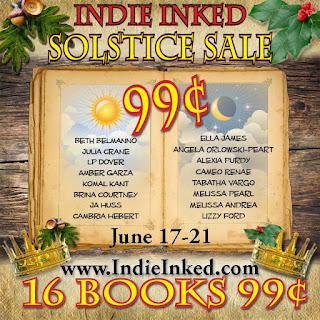 Celebrate the solstice with us! Enter to win two fabulous prize packs: The Oak King prize, a collection of luminous covers and enchanting stories, and The Holly King prize, a bounty of haunting covers and enthralling tales. Each paperback will be signed by the author.

Entry details are on the Rafflecopter form below.

Throughout the week, we will be highlighting these amazing books, so keep an eye out for blog posts and further details.

If you'd like to grab a copy of these books, here are the purchase links. One purchase equals 10 POINTS in the Rafflecopter draw.

Set in Stone by Beth Balmanno
Freak of Nature by Julia Crane
Forever Fae by LP Dover
Falling to Pieces and Dazzle by Amber Garza
Impossible by Komal Kant
Their Promise byBrina Courtney
Tragic by JA Huss
Recalled by Cambria Hebert
Selling Scarlett by Ella James
Wicked Fate by Tabatha Vargo
Forged by Greed and Forged by Magic:Origins by Angela Orlowski-Peart
Descent by Cameo Renae
Ever Shade, Ever Fire and Ever Winter by Alexia Purdy
Unknown by Melissa Pearl
Flutter by Melissa Andrea
Dark Summer by Lizzy Ford

a Rafflecopter giveaway
Posted by Melissa Pearl at 10:00 AM